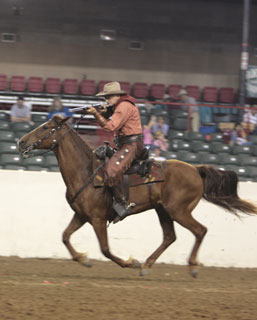 Thomas Block retired from his primary career as an airline pilot in April of 2000, after flying airliners for 36+ years throughout the US and Europe. In addition, he has been a professional writer for aviation magazines since 1969, and also a novelist. He has written several aviation-themed novels which have gone on to be best-sellers in many countries, including (updated with novelist Nelson DeMille, in 1998) the action/adventure novel “Mayday” – a novel that was made into the CBS Movie of the Week in October, 2005. His earlier novels have been extensively revised and republished in all major ebook formats and also in handsome full-size print (6″ by 9″ Trade Paperback) editions.  The novels and complete information about Tom’s audio book career can be found on his sister site: ThomasBlockNovels.com .

Tom had never ridden a horse until, one year after his retirement and at the urging of his wife Sharon, he gave it a try. He found that he enjoyed the experience and began looking for his own horse. After a short while he found Cloud, his Missouri Foxtrotter (Tom & Sharon now have several horses at the Flying B Ranch). The plan was to be a trail rider and, perhaps, to do some traveling. 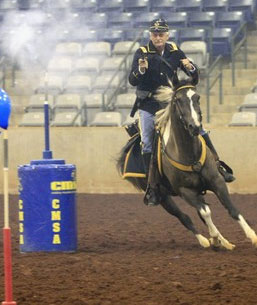 In 2003, Tom discoverd Cowboy Mounted Shooting. He immediately fell in love with this fast moving equine sport. He really enjoyed the adventure of it all, and the opportunity to become – in costume and in action – just like the cowboys that he once watched at the theaters and on TV as a kid. As he gained more experience with Cowboy Mounted Shooting, Tom became a participant in the Cavalry portion of the event and was soon a member of CMSA’s National Advisory Board for Cavalry. At the local level, Tom has been a member of the Board, Vice President and Chief Announcer for a Florida club. Tom travels throughout much of the country, previously with his horse Cloud (who is enjoying his semi-retirement here at the Ranch) and now his new horse, Comet – a registered QH Paint gelding. It is this traveling experience that gave Tom the idea to make the Flying B Ranch into a horse motel, modeled along the lines of the better horse motels that he has stayed at in his travels. 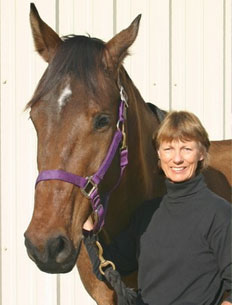 Sharon Block has been involved with horses her entire life. Raised in Texas, she has been riding since she was a child, and she has owned lots of horses and several other farms and ranches in the past. Primarily an English rider, she has done Hunter/Jumper, Eventing and Dressage, concentrating mostly on Dressage for the past few years. She is currently training her newest Dressage horse, Forrest, and rides him most every day. At the urging of her husband, she has even found the time to do some Cowboy Mounted Shooting. Also retired from the airline industry, Sharon had been a flight attendant for several airlines and has flown all over the world. Naturally, she met her future husband on one of those flights many years ago.